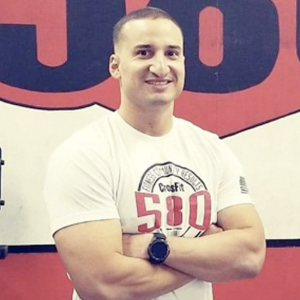 Michael comes to us from South Fremont CrossFit , where he spent the last year as a coach. Prior to coaching at SFC, Michael had joined CrossFit 580 over 2 years ago as a new member. Michael previously had 6 months experience with CrossFit, and had recently returned home from the U.S. Army, where he served as an Infantryman. Michael was looking for a place to become a stronger, faster and overall a better athlete, which is why he turned to CrossFit 580. His passion for CrossFit continued to grow, which ultimately led him to achieve his Level 1 certification. Since leaving the military, CrossFit has elevated his fitness, as he has completed a Spartan Trifecta during 2017 and most recently Ironman Nice, France in June of 2018, and continues to challenge himself in the world of fitness.

Michael has been selected amongst his peers to plan and execute his Army Reserve units fitness program.

TRY US FOR FREE